Cuteness
Best enjoyed with the sound off, so you can make your own "awwwwww!" noises without having to hear those of the videographers:
Otters holding hands
- posted by Diane @ 2:45 PM | (1) Comments
Wednesday, March 28, 2007

Mmm, that's good eatin'!
Libby, our 12-year-old greyhound, wouldn't come in last night. She paced and looked uneasy, then went ptooey and spit out a tuft of long white and grey hairs. I found the hapless possum under a bush, looking wary but unharmed as far as I could tell. It most certainly was *not* "playing possum", but rather was sidling farther under the bushes, carefully not looking at me. I had plenty of time to observe it - possums really are ugly things, rat tails and big juicy feet and all. It was gone in the morning but since they are neither bright nor fast, I'm sure we'll see it again. Why do the bunnies and possums hang out in the one yard that has the giant dog?! Maybe they'd rather deal with a dog than a handful of grade-schoolers...

Libby had some scratches on her mouth, and absolutely *reeked* of wild animal, so I allowed her to sleep far far away from us last night. Until about 4 am, that is, when she barked to let us know she'd tangled her foot up in her blankie again and couldn't get free. Mark actually had to cut the blanket off her. When dogs evolved the behavior of turning three times before lying down, apparently there weren't a lot of blankies around.
- posted by Diane @ 12:12 PM | (1) Comments
Tuesday, March 27, 2007

What did I learn from grading papers today?
In the northwestern U.S., the rainshadow effect results in a vast dessert east of the mountains. Yum!

Hump Day science
In light of the paper on latitudinal diversity gradients we're reading for journal club this week, I wanted to post the following, which always cracks me up:

The centrifugal theory of species diversity

After a few weeks of crappy sequences, my advisor and I painstakingly went through every step of the sequencing process together so as to eliminate any errors being introduced by my methods/chemicals/thermocycler etc. The result is coming through on the sequencer right now: lovely clean data (possibly *too* lovely, as I seem to be having an issue with too much DNA in my reactions). The solution is clear: my advisor should do all my sequencing for me.

Work on our bathroom and guest room moves forward rapidly. The "little" hole in the downstairs bathroom wall turned out to be a hole big enough for me to stand in, if I could stand on the edge of the drywall without breaking it. I also discovered that that bathroom would gain about 1.5 inches on every side if we stripped to the lath and redrywalled; it currently has plaster and two layers of drywall. Rooms shrink with every remodel.
- posted by Diane @ 2:50 PM | (1) Comments
Tuesday, March 20, 2007

Randomity
1) The White Stripes are releasing a new album this summer. Squee!! Chances of my field trip intersecting with their tour path this summer are very good. I will make sure of it.

2) DNA in French is ADN. However, PCR-RFLP in French is PCR-RFLP. I find the rules for universal vs. translated acronyms to be arbitrary and capricious.

"What's the French for fiddle-de-dee?"
"Fiddle-de-dee's not English," Alice replied gravely.
"Who ever said it was?" said the Red Queen.

3) Getting some work done on the house starting tomorrow. The defective shower started dripping onto the ceiling below over the weekend and that was the back-breaking camelstraw. You know we haven't have a functioning tub faucet in at least a year? Of course you don't know that. It's just another example of the little things people just learn to live with. If I were buying this house and I found out the faucet didn't work, I'd say "Oh, no, you are fixing this before we sign anything!" (In fact, almost that exact thing did happen, w/r/t the old shower handle that sprayed water in amusing directions.) But when it stopped working, we looked at the amount of tile-smashing and plumbing that would be required and it didn't seem like such a hardship after all. The bathroom is generally possessed and we just have to accept that.

4) Robins in the back yard; ring-necked doves down the street (and positive confirmation of the sound they make; very distinctive!); tulip leaves appearing. Snowdrops next door flowered about a week ago, which I think is about a month late. It's been very cold the last couple of months.
- posted by Diane @ 3:32 PM | (0) Comments
Friday, March 16, 2007

Get yer Irish on
I bet you didn't know that St. Patrick was actually a glacier:
Why Ireland has no snakes

In celebration of St. Patrick's Day tomorrow, we will 1) go to the vet to get Libby's nails trimmed (fun!), and 2) drive to Rockford to experience some of the city's finest non-Irish, beer-free dining. If I feel sufficiently motivated, I may trek downtown to see the dyeing of the Chicago River, just because I haven't gone in years and years. The parade doesn't interest me, but dyeing a major body of water a surreal shade of green is always worth a picture or two.

Pi Day Post
Happy Pi Day! To celebrate, I will discuss nothing mathematical at all. Instead: music! My mostly vain attempts to find new music to listen to, and a reiteration of the life-theme "Life's too short to listen to boring music."

Fall Out Boy - I've been subjected to the song "This Ain't a Scene, It's an Arms Race" on a daily basis in a Verizon commercial, and it sort of got stuck in my head so now I have it. Other songs on the same album: eh.

Fratellis - Another TV commercial song, this one for iPod. Garage-punk, good bouncy spring music, appropriate this week when we actually hit 70+ degrees (but later today will plunge to the 40s, and everyone's freaking out like it wasn't in the 40s just a few days ago and we all own coats anyway so who cares?). I like this one enough that I plan to get the rest of the album. I don't like Mac computers, but I love my iPod and their commercials have the best songs since the old Mitsubishi campaign.

Iggy Pop - Best Of. Iggy takes some getting used to but he's so much fun! "I Wannt Be Your Dog" takes me back to a hilarious fanfic series, Sith Academy, that now I want to go reread except I'm supposed to be getting ready for work. Also, "Lust for Life" reminds me of Caribbean cruises. Why am I getting all my favorite songs from commercials these days?! Argh.

Arcade Fire - Neon Bible album. I keep hearing recs for this from everywhere, so of course had to try such a can't-miss album. Oh my GOD it's boring. Goodbye, Arcade Fire!

Roxy Music - Best Of. I quest back in time for genres and bands I missed the first time around, sometimes pleasantly surprised and sometimes feeling relief I didn't bother way back when. Roxy is a "glad I didn't bother" band. Brian Ferry, who told you you could sing?

Kasabian - Kasabian album. Heard the song "Club Foot" on Q101 the other day and loved it. It's a semi-techno song, great beat, very addictive. The rest of the album is...not. We'll just keep the one song, thanks.

And lest you think I hate pretty much everything, I listen to the latest My Chemical Romance and Strokes albums over and over, Sleater-Kinney and Babes in Toyland share my anger when I'm irritated at the world (which is often), and I've rediscovered my love for The Cure. I bought an album by Earl Greyhound, partially on a recommendation and partially because of the name, and they are absolutely fantastic. I also considered going to the Bonnaroo festival in Tennessee this summer, to see The White Stripes and others, but then found out the tickets are hundreds of dollars. You don't just go to one show, you go camping for four days and see every performer there. It actually sounds fantastic but not alone and not for four days. My mission this summer is to be efficient, productive, and occasionally amused. More on that later.
- posted by Diane @ 8:22 AM | (0) Comments
Thursday, March 08, 2007

Even atheists have their Easter traditions
The season's first carton of marshmallow eggs has been purchased. I think I went through 4 dozen eggs last year, which sounds awful but that's over the course of probably 6 weeks so it's not *that* bad. Also, I've had my cholesterol checked recently so I'm good to go.

Music on the El
Blue Line, Jackson stop (where the renovation is almost done and it all looks so bright and shiny, while by comparison the rest of the stops look like 19th century sewers): a pair of young men playing pipes and a tiny little mandolin-like instrument, to taped accompaniment, in a lovely medieval/Celtic style. I was really enjoying their songs when I realized I was humming along with one. I had no idea what song it was or how I knew it, since ethereal instrumentals are usually not my preferred genre, and it proceeded to drive me crazy for the next ten minutes or so. As I climbed the stairs at Halsted, it finally hit me: Wind of Change by the Scorpions, a song I probably haven't heard in 15 years. It's a very nice song, though I never would have expected to hear a song by a German metal band being covered in Celtic style in an El station in downtown Chicago. Then again, maybe that's exactly the kind of thing I should expect...

Very exciting times!
Holy crap, I cannot even imagine attempting to do research without the internet. Am I spoiled? Absolutely. Does that bother me? Not a bit!

I am hunting down plantings of my linden trees in arboreta across the continent. If I didn't have the internet, I'd need a printed directory of arboreta (and a notebook, because I'm sure such a thing couldn't leave the library) and a phone, and would have spent the last several days cold-calling dozens of places, attempting to reach those few people who have a clue what I'm talking about. Have I mentioned my phobia about phones? One massive phone bill and one crappy week later, I might have my answers. Maybe.

Nowadays: I google, then I email. No social anxiety, no phone bill, and no crappy week, at least not for that reason.

Now if only I had some DNA sequences for the Malvaceae family so I could design primers for Tilia... oh, wait, that's on the internet, too. But what about Sargent's 1918 treatment of Tilia taxonomy? Yep, already downloaded. Once in a while, I have to actually schlep my lazy butt over to the library to photocopy, yes, photocopy a journal article, but that's not the internet's fault. That's UIC being too cheap to shell out for on-line subscriptions to botany journals. Oh well, it's probably good to keep my copier skills sharp in case this whole science thing doesn't work out.
- posted by Diane @ 2:25 PM | (0) Comments
Sunday, March 04, 2007

I can't believe it either
I have somehow convinced my orchid to rebloom. I can't remember when I bought this, but it was at least two years ago. It has languished sadly on my kitchen windowsill, sending roots towards the sink like it knows where the faucet is. Occasionally, I dust the leaves. And now, mirabile dictu, actual flowers have appeared. 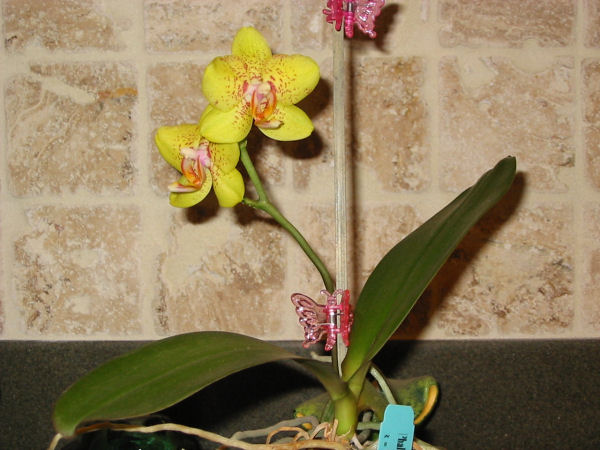