We're all mad here
Link from Snark: The Wonderland Expedition Kit, which combines things I adore: Victoriana and Alice in Wonderland. Ever wondered what a fetal mome rath looks like? Now you know!
- posted by Diane @ 8:25 PM | (0) Comments
Saturday, November 29, 2008

Ninja Scientists
Over the last few summers I've become very adept at Ninja Botany. This is when I don't quite 100% have permission to take plant samples from a site, or even if I do, I'm usually required by permit and by convention only to sample when nobody is watching. It's bad form to let people, especially kids, see you taking plants from a preserve or botanic garden because they might either a) report you or b) think it's okay to do the same. So I've developed some clever tricks that allow me to get what I need, even from busy parks. Sometimes it's fun. Sometimes it involves leaping and scurrying and hiding behind trees. Sometimes it involves disguises or camouflage. Sometimes it involves crafty conversations with nosy park rangers. I will not tell you my methods, but I will say that in four summers of field collections, I've never been caught. Ninja Botanist! You never see her coming!

Today I had my first taste of Ninja Zoology. A colleague at UIC is studying squirrel genetics and is always looking for new material. An unfortunate grey squirrel obliged by dying on my neighbor's front lawn. We saw it in the early afternoon when we walked Miss Foley to the park. I did a flyby later but there were neighbors everywhere, doing yard work. I waited until after dark and successfully returned home with my prize. Some unpleasant sciencey stuff took place and now my friend will have one more data point for her project (assuming the DNA is still intact). Ninja success!

To erase any unpleasant images this post may have inspired, here is a fox squirrel that was in my yard eating fallen birdseed today and is to my knowledge still very much alive: The honeymoon continues
The Federal Building downtown is surrounded by Homeland Security; people who work there now must show photo id just to approach the doors. A DHS war wagon lurks in the plaza by the post office. The Trib details what Michelle is wearing today. Chicago is now DC West, for better or worse. Remember, remember the 4th of November 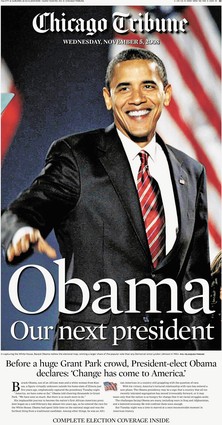 I have a lot to say but am finding it hard to write. I'm giddy and relieved and proud and hopeful. I hope the next four years live up to the promise of the last 24 hours. It's going to be an interesting journey.
- posted by Diane @ 6:21 PM | (0) Comments
Tuesday, November 04, 2008

Vote.
It gives you the right to complain.

Treehugger song of the day
I'm a sucker for tree-themed anything. Thanks to the joyous timewaster that is Rock Band 2, I have been introduced to this song. It doesn't mention basswoods but they're lurking between the lines I'm sure.

There is unrest in the forest,
There is trouble with the trees,
For the maples want more sunlight
And the oaks ignore their pleas.

The trouble with the maples,
(And they're quite convinced they're right)
They say the oaks are just too lofty
And they grab up all the light.
But the oaks can't help their feelings
If they like the way they're made.
And they wonder why the maples
Can't be happy in their shade.

There is trouble in the forest,
And the creatures all have fled,
As the maples scream "Oppression!"
And the oaks just shake their heads

So the maples formed a union
And demanded equal rights.
"The oaks are just too greedy;
We will make them give us light."
Now there's no more oak oppression,
For they passed a noble law,
And the trees are all kept equal
By hatchet, axe, and saw.