Brr
I was realizing this morning that the cold weather makes me miss my baby boy. Whenever the temperature dropped below 40 or so, Jazzy would shiver and chatter and curl up into an impossibly tiny ball, hiding his nose under his skinny legs and generally looking miserable. We'd either bundle him up in his Superdog coat or wrap him in a blanket like a big taco, and he'd slowly warm up and unfold into the shape of a contended greyhound again. Blankie-wrapped dogs can make the whole house seem cozier. I'm catching up on my blog reading, can you tell? *flop*
The completed paper was just emailed away. It was only a half page too long; they won't count off for that, will they??

I am madly in love with EndNote. What a joy it is to write a paper and never once have to think about typing and formatting all those stupid references. Remember the good old days when you'd write a paper and you had to be reminded that no more than 2 or 3 references could be encyclopedias? When's the last time you even used an encyclopedia? Nowadays I suppose teachers have to tell their students, "Wikipedia is not a source."

T-minus less than two days. Pulled last-minute Bayesian analysis out of an unmentionable orifice. Maybe someday I'll find out what cold and heated chains are, and how I'm supposed to calculate the burn-in. For now, according to my TA, it's enough that I regurgitated what we did in lab and wrote some numbers on my tree. Wow, what a learning experience.

Interesting factoid: Swofford intended his software PAUP* to be pronounced "pop-star", but no one says it that way. It's always either "powp" (rhymes with cow-p) or "pawp" (rhymes with raw-p). I flip-flop but I think I lean towards the cow-p version. Too bad; "pop-star" would be more fun to say, but nobody would know what I was talking about.
- posted by Diane @ 10:42 PM | (0) Comments
Monday, November 26, 2007

Muffin betrayal
Who puts orange in a blueberry muffin??

Thanksgiving is when?!?!!!
I have a paper due on the 29th. It involves me learning an entire field of study and applying it in many ways and justifying all my reasons, in two weeks. Presumably I have been learning all this stuff all quarter but there is a big difference between taking notes on a topic and having data to analyze all by your lonesome. The most frustrating thing is that I'm running up against the limitations of my computer. This offends me. Hasn't technology progressed to a point where I can only be limited by data availability? Why the heck not? Today I ran a bootstrap analysis on a maximum likelihood tree. Default is a hundred reps, a thousand is better, ten thousand is best, and you want to be best, right? What do you think of someone who only does the bare minimum? I started it running before I went to class and returned 75 minutes later to find that it had done 36 reps. Disgruntled, I cancelled it, set it to 100, and left for the the day. I think it's time to make a date with the UIC Unix cluster....
- posted by Diane @ 6:00 PM | (0) Comments
Friday, November 16, 2007

The Truth
You all don't need to read this... I'm just entering a contest by linking to this:
truth

Choosing rhymes and jump rope songs
I just finished reading Sandra Cisneros' The House on Mango Street. In one chapter, the little girls jumped rope and chanted rhymes, and I remembered the various choosing rhymes (where you count off people in order to choose "it" but of course the counter could engineer "it" by adding words at the end of the rhyme) and jump rope songs we used to sing back in Rockford. Where did we learn these things? Who knows, but except for a few alterations, these are pretty universal...

Bubblegum bubblegum in a dish
How many pieces do you wish?

Cinderella, dressed in yella
Went upstairs to kiss her fella
Made a mistake, kissed a snake
How many doctors did it take?

Engine engine number 9
Coming down Chicago line
If the train should jump the track
Do you want your money back?
Yes no or maybe so
Y-E-S and out you go with a dirty dirty dishrag on your BIG FAT TOE!
- posted by Diane @ 2:00 AM | (3) Comments
Wednesday, November 14, 2007

And on top of all that, when do I get to enjoy my marriage, manage my home and finances, see my family and friends, and just play once in a while?

Have I mentioned before that I miss having a real job?

The soap opera that lives on my hard drive 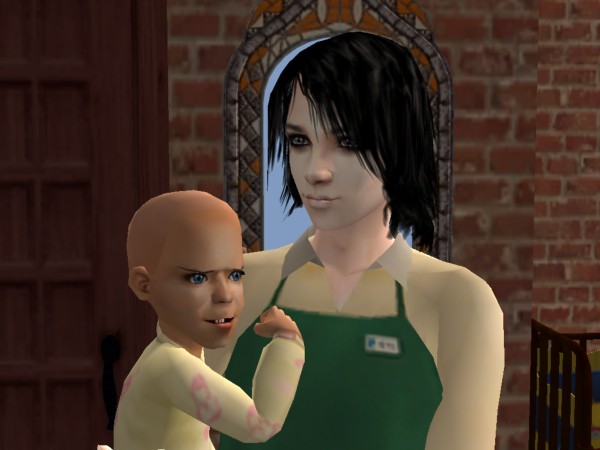 Baby Milkie might be an evil overlord in training, and Gerard is developing a strong suspicion that she (yes, she!) might not actually be his, but that's no reason not to love her to bits.
(btw, thanks to Jaydee for making the Gerard sim - he's just so pretty to look at)
- posted by Diane @ 9:48 PM | (0) Comments
Thursday, November 08, 2007

Learn something new every day
Today, an elderly black man on the #4 bus regaled us with a largely fictional but always entertaining history of blacks in Chicago. The highlight was the story of how Jean Baptiste Point du Sable, the city's first settler (true, in 1779), "landed in Chicago - and when I say landed, I mean landed, in an airplane!" After much amused protest from other riders, he revised his story a bit and took out the plane, but stood firm in his adamant statement that du Sable did actually live here. Which nobody disputed.
- posted by Diane @ 9:20 PM | (0) Comments
Monday, November 05, 2007

2) A woman struggling to carry a large silvery urn mounted on a marble base, on the El.

3) A woman struggling with two large boxes of fundraiser goods, also on the El. I wonder what percentage of school and scout fundraising sales are actually made by the parents, with the kids getting all the credit? I remember getting a badge in 3rd grade for selling Girl Scout cookies (the badge had a whale on it for unknown reasons). "Look at the badge I earned!" I said gleefully to my mom. "WHO earned?" she snarked back.

Also: you should read this post. It will make you furious and proud at the same time. A lot of people in this world suck. The author of the post is not one of them.
- posted by Diane @ 1:29 PM | (1) Comments