View out my back window this morning at about 7:15: 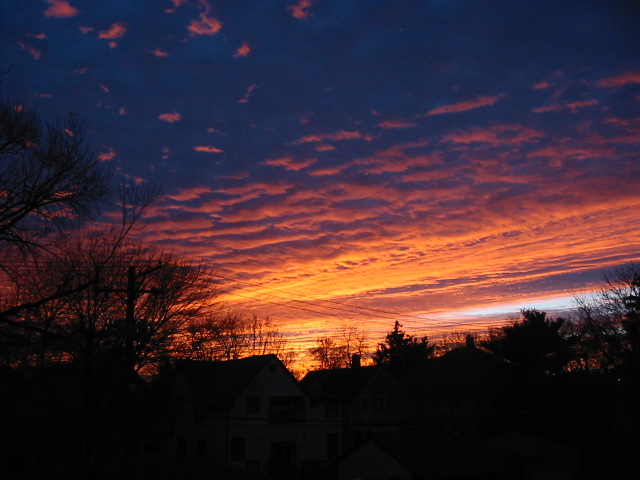 Looks like I will be taking biochem next semester. *shakes with fear* I made an executive decision to drop physics (again!) and just take two classes next semester. Two little bitty 4-credit 400-level classes. Bah. That should give me time to catch up in some NCP stuff at the Garden, too. I like the prospect of having no night classes for a while. My grad school app is done and I'm taking it to their office tomorrow. Now that I'm pretty sure I won't get in, I find applying to be much less stressful :P

Finally defeated the stupid Jabberwock in Alice, although it took a cheat code to do it. I just arrived at the Red Queen's but didn't have the energy to finish it, so I'll leave her for another day. Had to test out my New Computer, though (thanks, honey!) -- games look very nice on the LCD, and boy what a difference the faster processor makes!

Well, it's been a busy month, and it's not over yet. I survived finals, though I had a *killer* sinus/stress headache for the plant morphology final and was almost entirely unable to sleep afterwards. Got my grades yesterday - the 4.0 continues to hold up! I rock. Then Mom and I headed for New York for several days of walking and seeing stuff and being generally impressed. Quick run-down of what we did/saw:

Thursday
Arrived at La Guardia, purchased a Metropass, took a bus to Manhattan, and got a crash course in figuring out their subway system. The stations are multilevel underground, and the signage is a bit mysterious, but armed with a system map we succeeded in getting around pretty well! Not bad for a couple of country girls :)
Hotel was the Herald Square Hotel in Midtown (31st St btwn 5th and Broadway). Nice little room, very convenient location. That area is apparently where one would go to buy a rug in Manhattan. Right around the corner from many fast-food places, donuts, Starbucks, funny little souvenir shops that also sold pipes and bongs, and the Empire State Bldg. We got to the hotel around dinnertime, wandered out to find food, ended up in the Cellar Cafe at Macy's. Had 1/2-pound burgers and polished them off. Visited Empire State Building (no lines at night) for an astonishing view of the city lights.

Friday
Subway to Battery Park and ferry to Statue of Liberty. *Very* windy and cold! Looked around Castle Clinton, a former fort for the defense of the city, which was converted to a fancy theater and then allowed to fall into disrepair before they restored it to its original appearance. Statue was beautiful and minty-green in the sunlight. Its pedestal is actually another old fort, a star-shaped one. I lost a roll of film somewhere along the way and I'm so upset that I may have lost my pics of the statue. We got a personal guided tour from a nice Park Service guy named Mark, who is from Milwaukee. The ferry then went on to Ellis Island, but neither of us had any burning need to visit so we stayed on and returned to the city.
Walked north up Broadway and paid a visit to Wall Street, which I just loved! I was surprised by how hilly Manhattan is, and the financial district is a series of hilly canyons, dressed for the holidays. Saw tourists getting their pictures taken with friendly-yet-deadly armed guards. Then we went on to the WTC site. It looks like any construction site, except there's no construction being done. The surrounding buildings are still draped in fabric, their exteriors gone, and that more than anything else really made the place feel like a blast crater where horrible destruction took place. The site is so riddled with the images we all carry with us that I couldn't look at it for very long, and walked away so angry that I couldn't talk about it. I still can't.
Moving east, we walked across most of the island (doesn't take long!) and had lunch at the South Street Seaport. It smelled horribly of fish, even though the market activities were already over for the day. Nice view of the East River and Brooklyn Bridge from their food court.
By this time, my cold-turned-sinus-infection was dragging me down, and we returned to the hotel for a quick nap. Then we headed north and entered Times Square (which is not square) during the Friday afternoon rush. We let the crowd carry us along and oohed and ahhed at the lights and TV screens. Then we ducked down 44th St. to John's Pizza for some thin-crust New York-style pizza. John's is in a converted church, with a massive mural of the city on one wall. The St. James Theater is almost next door. This is where we saw The Producers! It was excellent, very funny, and Hitler was SO gay!

Saturday
Went to the Empire State Building again, in daylight. The line was horrendous but not as bad as it was when we came out! The line at that point went around the corner and down the block. Suckers. We went to Rockefeller Center, saw the tree and skating rink, then went up to Central Park. Central Park doesn't really look like I thought it would. It's very rocky, with picturesque rock formations all around, and its paths wind over and under each other in a baffling maze. We went up into Belvedere Castle, visited Strawberry Fields, and saw a peregrine falcon pretty close up. I had my picture taken with Alice in Wonderland, and we peered over the wall at the petting zoo, where feisty goats were trying to climb the fence to get at the treats the kids were holding. We also encountered a crowd of a hundred or so Santas of all shapes and genders. They claimed to be at some sort of Santa boot camp, but we're not sure what their real purpose was. One Santa asked my mom if she's been naughty this year, and she said yes, very naughty, thereby sending me into years of therapy. He gave her a gift that turned out to contain a picture of a naked woman. Gotta be careful with these city Santas :)

Sunday
Rockefeller Center and the NBC studio tour. Ironically, this was the morning that the news of Saddam Hussein's capture was announced, so it was not quite business as usual at NBC. We saw Tom Brokaw doing his news report - poor Katie and Matt were upstaged, I guess. On the tour we visited Conan O'Brien's studio and the SNL studio, which is strangely wide with hardly any seating. We then walked up to see the Ed Sullivan theater where Letterman is. We also saw Carnegie Hall, which is near there, and the Hello Deli (unfortunately closed). Had lunch at the Stage Deli, where the food is named after celebrities and there are plates of pickles on the table. We had stuffed cabbage - yum! Then we went to the American Museum of Natural History, where we looked at all sorts of dinosaurs and strange undersea creatures. I liked the biodiversity display, with examples of organisms from throughout the tree of life. Then we returned to the hotel, had a sandwich from Subway, and collapsed for the night because after trudging through snow and rain and ice, we were tired!

Monday
Returned to the airport, flew standby and got home a bit early, and that was that! All in all, an excellent trip. Manhattan is very cool, like Chicago but way more intense. I will never complain about Chicago traffic or crowds again! (okay, I'm lying, but Chicago does seem quiet and slow after Times Square) I have my fingers crossed that the missing roll of film turns up, but I'm not hopeful.

So, I'm cool, calm, and in control. My studying is going reasonably well, I have a list of things to pack (and things to buy - of all the times to run out of deoderant!!), I've cleaned the bathrooms and the guest room (Mom incoming!!), and thought, as long as I stay HEALTHY, I have nothing to fear.

It's just a cold. It will NOT blow up into one of those systemic exhaustion and coughing things. I have decreed it.

Tonight, I handed in my last assignment of the semester. Monday is my last class. Wednesday night, my finals will be over. And then, finally....

I am SO not ready. I'm not even sure when our flight leaves. :[ Tomorrow at work, I will be frantically collecting all my info and printing out emails. Who knows -- I may even do some actual work while I'm there!