Toto too?
We heard the emergency sirens on Friday afternoon for the first time since moving here. It seemed like a regular thunderstorm rolling in, but then we heard the sirens (took a while to recognize what that sound was!) and checked on TV for a weather report. Then we hauled the dogs downstairs for a very boring hour in which Mark played on the laptop and I fretted and listened for weather updates. I do not mind saying, I'm terrified of tornados, and I consider it a perfectly rational fear. I've been too close for comfort to two in my life, and that's two too many. I will never forget huddling under a bridge with Mark and Jazz and a dozen high school kids in Kearney, Nebraska, or the sound the tornado made, like a distant racetrack. Luckily, on Friday there were no touchdowns. That whole thing about "tornados can't hit cities" is a myth but so far so good.

Reading on the El: Surely You're Joking, Mr. Feynman! - I've been wanting to read this forever and finally found it at a used bookstore yesterday.
Reading at home: Guilt, by John Lescroart. It's moving slowly but still very engaging. Whodunnit? I don't know yet!
- posted by Diane @ 12:40 PM | (0) Comments
Sunday, September 17, 2006

Batting 1.000 on the season
We went to our first and last Cubs game of the season today, in which the Cubs beat the Reds 11-3 in a cheery rout. Zambrano pitched 7 shutout innings and helped his own cause with a home run. I heart Zambrano! Our seats were in the second row behind home plate, and we were of course thankful for the helpful net that protects us from foul balls... until a ball was lined straight back and *through the net*, hitting the ear of a guy sitting about 8 seats away. Yikes. During the last inning, we moved up to the front row just because we could, and also to get away from the guy I sold our extra tickets to. Next time, remind me to set a width maximum. I'll be happy to sell you my tickets but you must be 1) skinny, 2) not an obnoxious drunk, and 3) willing to share your nachos.

Like the huge dorks we are, we taped the game and then went home to see if we were on TV. Turns out we were in the blind spot between the center field camera and the left-handed batter's camera, but we caught a couple of blurry glimpses of ourselves during pan shots. Good place to sit if you don't want your boss to know you skipped work to go to a game. (We also saw the guy get hit with the foul ball on TV but the announcers didn't even mention it.)

Thank you to the various people out there who have sent get well wishes to Jazzy. He is pretty happy but I don't think he'll ever be back to where he was a month ago. He and I shared a blankie in the yard yesterday, soaking up some of the last good weather of the year. 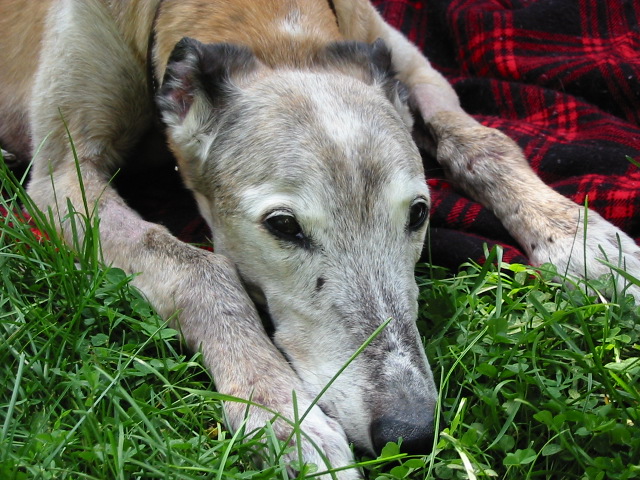 I was afraid that for my 35th birthday, I would lose my babydog. Instead, I got a slowly recovering dog who is eating normally, alert and happy, and playing with whatever stuffies are within reach. He still needs help getting up most of the time, and he walks like he has no knees, but he's making progress every day. It's the perfect present.

Libby is a very helpful assistant nurse. She always makes sure to hoover up the kibble that he spills on his bed, and she keeps his bed warm when we take him outside.
- posted by Diane @ 1:47 PM | (2) Comments
Thursday, September 07, 2006

Hits just keep on coming
Jazzy's in the hospital. I'm trying not to think about it. They say he's doing well but there's a small chance that what he has won't respond to the treatment. In the meantime, he's hanging out behind the counter at the vet and being popular. It kills me that he's being cute and lovable and I'm not there to share in it.

Reading for distraction. On the El: After the Fall, by Judith Kelman. Was an arbitrary selection from the bookshelf. A psychological thriller, not that well-written, but interesting enough that I will stick with it to find out what really happened. On my nightstand: The Plot Against America, by Philip Roth. I generally enjoy Roth's writing and this is an interesting bit of alternative history. Kind of a frightening commentary on how charisma can make voters forget even the most deeply personal offenses.

Spent about an hour this morning trying to figure out how to hack the Overdrive DRM on the Chicago Public Library's audiobooks. They currently can't be played on iPods, which sucks since Overdrive is the library standard across the country and iPods are the most popular audio player. I could pay for software to do the conversion, but I refuse to do that. The only nonmonetary solution I can find is to write the audio files to CD, then import the CD audio to the iPod. This seems like a waste of CDs, though. I'm going to look into capturing an audio stream and let my PC play the books to itself during the day.
- posted by Diane @ 8:38 AM | (0) Comments
Friday, September 01, 2006

Mmmmmm.... bleah
For lunch: Wendy's French Fries of Happiness(tm). They were *awesome*. Now I feel a little sick though.

Libby seems to be doing well on a regimen of Pepcid AC - two doses, two meals, no barf. Still so sadly skinny but we're feeding her small amounts as often as we think it's safe. Right now I see her writhing around on the dogcam so she seems pretty happy!

The new Walgreen's opened on the corner of Irving and Pulaski yesterday, and we visited it the first time last night (to get the Pepcid, in fact). Having a source of muffins and Halloween candy between my house and the train is a Very Bad Thing.
- posted by Diane @ 1:47 PM | (0) Comments