Spouselessness
Supposedly I'm studying much too hard to even notice the empty house... but no, I'm taking the night off. I'll study tomorrow. Turning in my proposal draft lifted a burden from my shoulders, possibly aided by my advisor's pep talk (I suspect she was blowing smoke up my skirt, but it helped anyway). I know when the proposal returns to me it will be a mass of red ink, but that's what drafts are for.

This brought a bittersweet smile: 15 Things Kurt Vonnegut Said Better Than Anyone Else Ever Has Or Will

And so does this: 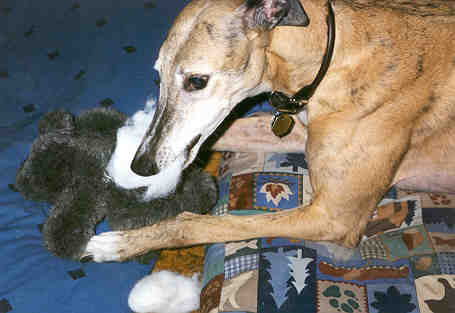 w00t
I am up to 12 variable sites in my little chloroplast genomes, with one more marker to screen. And... AND... I have found massive amounts of intra-individual variation in a nuclear marker. What does this mean? It means that the scope of my project proposal has suddenly expanded, just over a month before I must defend the silly thing. Phooey.

This is supposedly Emergence Week for the 17-year cicadas, and I have yet to see a single one. I'm very disappointed, but hopefully this warm weather will bring them out soon. I don't remember the last one at all and I feel like I really missed out.
- posted by Diane @ 4:40 PM | (2) Comments
Thursday, May 17, 2007

Close encounters
I stopped on my way back from Quizno's today to watch a black and white warbler hop cutely on a tree trunk. Then I was distracted from that cuteness by other cuteness: a squirrel hauling an entire paper fast-food bag into the crown of a thorny hawthorn three. I hope there were fries!
- posted by Diane @ 6:24 PM | (0) Comments

Procrastinating (of course)
1) While my gel polymerizes, I am taking a moment to read "How to write consistently boring scientific literature," in the May 2007 edition of Oikos. I like to think I'm able to interject some personality into my writing, but the need to adhere to strict word-counts and other publication requirements will surely leave my writing a dry, brown husk. Maybe I should sprinkle my papers with pictures of my dog.

2) A meme just for myself:
Titles of Dissertations I Would Have Written if I'd Chosen Other Educational Paths
--The Physics of Curly Hair: A Study in Spring Mechanics and the Impact of Atmospheric Humidity on Keratin Alpha-Helix Rotation
--Atheists are Nice People, Too: The Fallacy of Equating "Morality" with "Christianity"
--Chicago's Social and Political History as Reflected in its Literature
--Urban Development Patterns in the Age of Highways and Railroads: Concentric Rings or Spiderwebs?
--The Rise and Fall and Rise of Feminism in America: The 1920s, 1950s, and the 1960s and Beyond
--The Future of Sprawl: The Long-term Fate of Low-density, Automobile-oriented Development in Aging and Expanding Metropolises
--Don't Mess With the Nuns: Chicago's North Park Village and the Fight to Save Urban Green Space, a True Story

The blue birds of happiness
Geez, I go my whole life without seeing blue birds (except the jays and the bluebirds, and even bluebirds I've only seen a couple of), and this week I've seen two indigo buntings (or the same one twice) at our feeder, and then this morning I found another bunting lying stunned on the sidewalk outside the lab building. I called the rescue number and they said to put him in a box or paper bag and bring him in, but by the time I got the box he had more or less recovered. I tried to pick him up and he scolded me loudly and flew off to cling to a window frame on the next building. He's probably still there, saying to himself, why oh why did I ever leave South America??
- posted by Diane @ 10:27 AM | (0) Comments
Thursday, May 10, 2007

How low can I go?
I've actually been maintaining a pretty even keel this week. My lab work has finally - Finally!!! - yielded enough variable chloroplast characters that I can say with some confidence yes, my group shows variation. Out of more than 5000 bases sequenced, I found 9 whole variations. Halle-freakin'-lujah. Next week I learn to clone so I can tease apart my ITS copies. We're not sure where that line of work might lead, but when odd patterns show up in the sequences, we might as well pursue them a bit.

I'm studying during most of my free time. I'm understanding things. The semester is over so I can devote more time to my proposal. Things are... okay. But today, one of my school friends, a wonderful and well-intentioned person, was so full of helpful advice and prelim tips that a few minutes later I went into a full-fledged panic attack. It was really scary, not to mention I was terrified of anyone actually seeing me hyperventilating and close to throwing up, so I ran to the second floor and hid for about ten minutes until I could breathe normally. All the way home I was an absolute wreck. I don't blame her - she was just trying to help - but if I hear another piece of advice about prelims I am going to go ballistic. I need a hat that says "DO NOT TALK TO ME ABOUT PRELIMS". As DH said, with his usual talent for appropriate metaphors, the work I have ahead of me is like a mountain, the most steep and daunting mountain imaginable. All I can deal with at any moment is the two or three steps immediately ahead of me, because if I stand back and look at the vastness of the mountain I will be overwhelmed and stop climbing. My friend is the mountain climber who is scampering back down from the top and telling me about all the stuff she saw on the way.

Two or three steps at a time. It's all I can do.

Rats. Happy things: saw an indigo bunting at our birdfeeder. My Geum triflorum is blooming; I have a picture to put on the other blog but I don't feel like fixing the ftp settings. Most of the grading is done for the semester, although out of the goodness of my heart I am regrading two exams of students who appear to have frame-shifted their scantron answers. Am TAing the same class again in the fall - hopefully with fewer than 160 students this time.

Things we can't live without
Paged through some forestry supply catalogs today to see if they have anything useful for the summer. They're chock full of things I *must* have, or at least think would be fun to play with. My favorites are: inflatable kayaks, RESTOP personal lavatory pouches (useful on busy lab days!), long-handled snake-catching tongs, and 150 feet of bright orange tape that says "KILLER TREE" with a skull and crossbones. They also carry mole traps; how the trap works is not clear but it has six long spikes and is spring-loaded. Hard to imagine hating moles that much.
- posted by Diane @ 3:21 PM | (4) Comments
Tuesday, May 01, 2007

Grumpy bird
The female half of UIC's resident breeding pair of peregrine falcons: 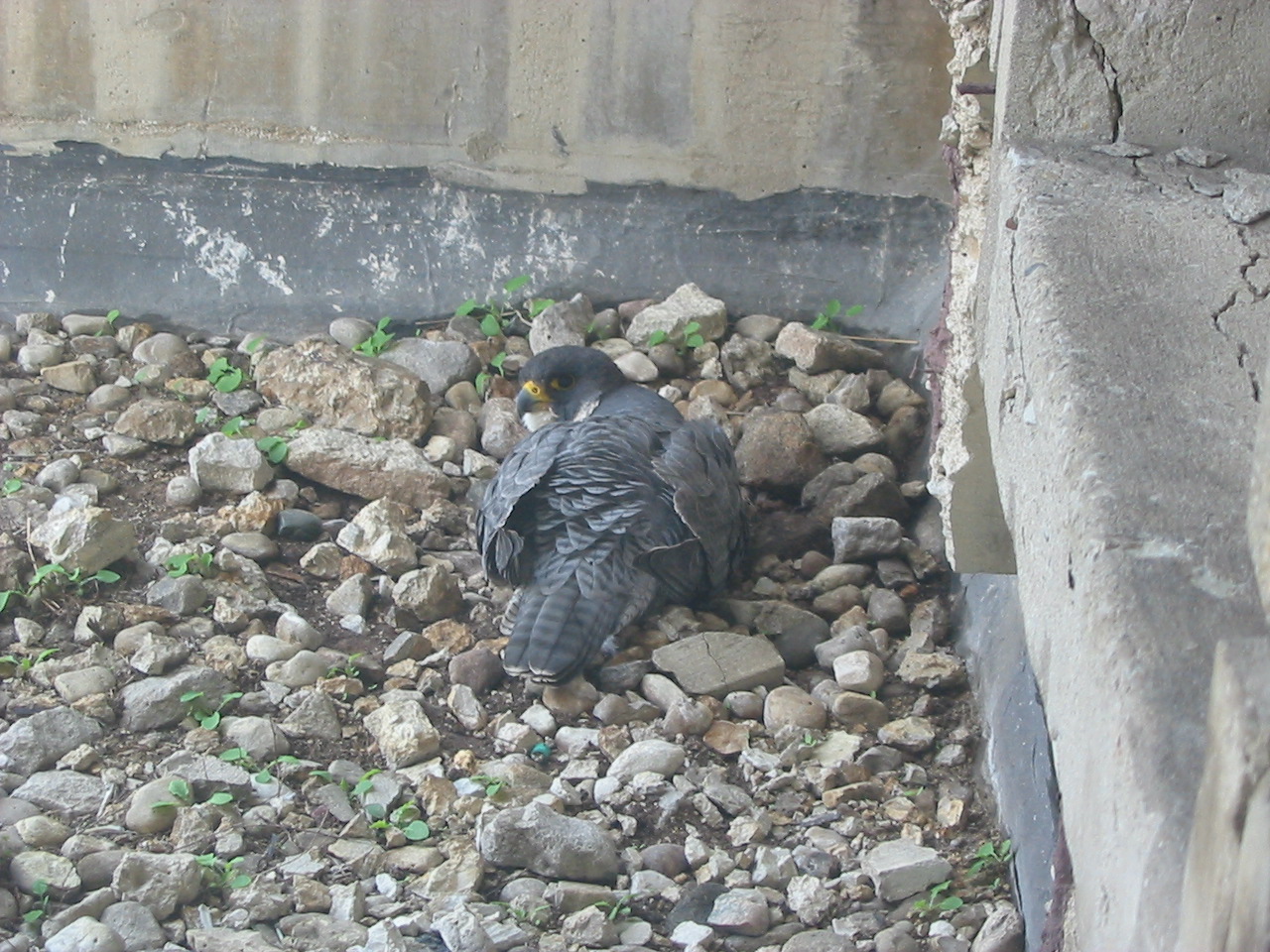 And the million-dollar lake-and-downtown view from their nest, 28 stories above the West Side, facing the (in)famous Chicago Circle where I-94, 90, and 290 converge in an ill-conceived, stroke-inducing knot: 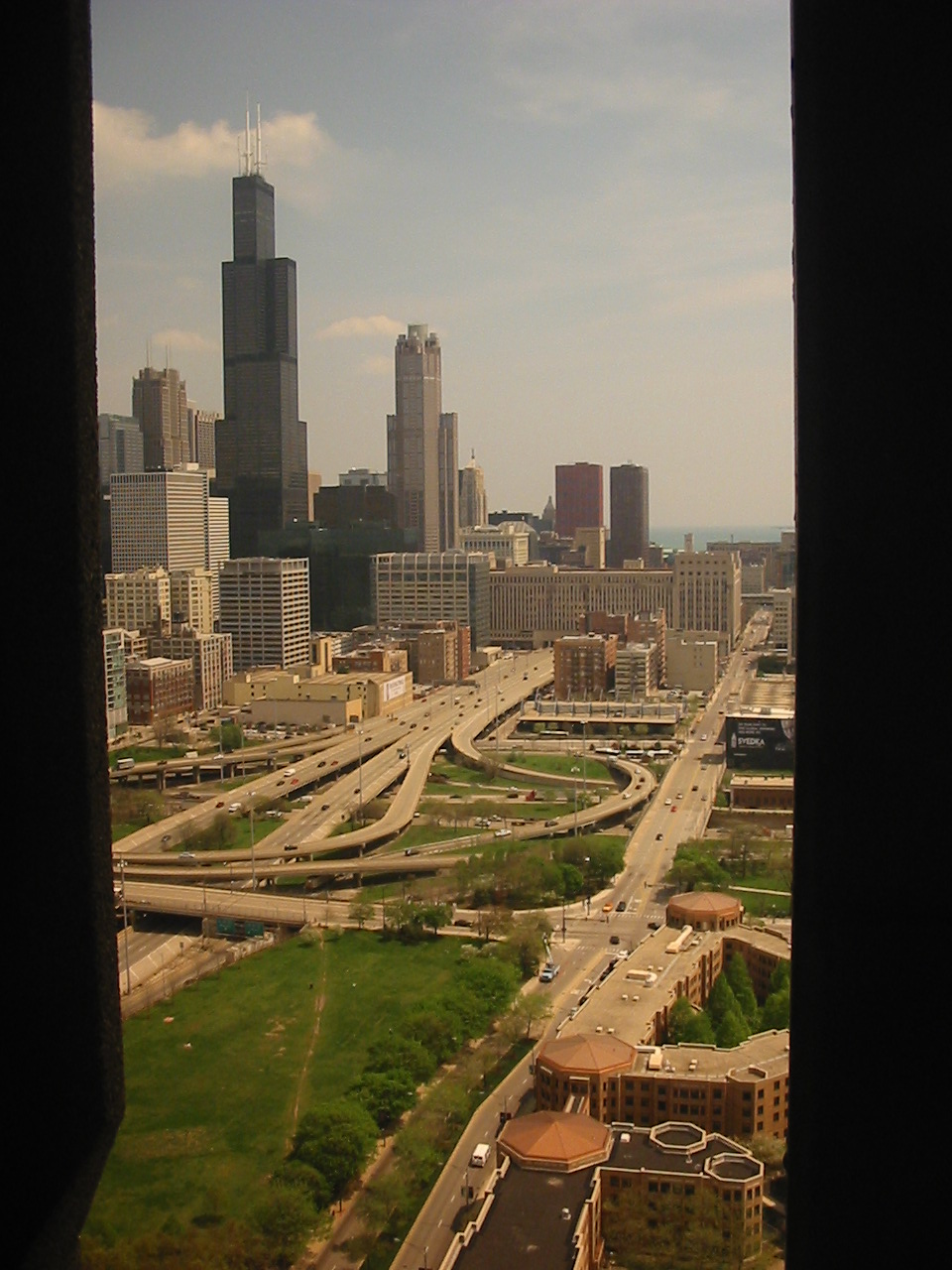 I got to visit the peregrines at UIC today. Picture forthcoming.
- posted by Diane @ 2:02 PM | (0) Comments

In spring, a young worm's fancy lightly turns to thoughts of love
In the garden this morning: earthworms doing it!! It was hilarious - they were each halfway out of a hole in the dirt, with those thickened part of their bodies aligned and touching. Then I accidentally startled them and they separated and zipped back down their respective holes like teenagers when the parents come home.

Also, next door: squirrels doing the vertical tango on a tree trunk. Who says romance is dead?

In the yard: our second brown thrasher of the season (flinging mulch everywhere), and a rose-breasted grosbeak. Also, the white-crowned sparrows have arrived.

I've finally cleaned off the desk in the guest room and now have a place to study that is away from the usual house activity. Now if only I could clean out my brain as easily. Tomorrow is May 2. MAY 2!!!! Two freaking months. I'm doomed.
- posted by Diane @ 11:24 AM | (0) Comments