Stupid
I *hate* learning from my mistakes in front of people. It is so humiliating, especially since this is something I already knew, I just somehow...forgot. Put the freaking comb in the gel FIRST, you moron.

more yawn
Two times up and out with dogs last night. The second time, I tried to enjoy the mild weather while sitting on the back porch, then realized that small somethings were hitting my skin. Flying ants!!!! ARGH!! Dozens went in the house with me, on the dogs and in my hair. I spent some quality time dancing around beating at my head and clothes but there were always more. They liked the kitchen lights so we left the light over the sink on, hoping to keep them from wandering the house, and in the morning there were several dead in the sink. Oh how I hate flying ants. I'm glad they only last a day or so. Have never had them swarm into my hair before, though :(

Looked up "flying ants" on Google and the top ad hit said "Flying Ants. Find anything on eBay! www.ebay.com"

Have to go in today to redo my sequencing gel from yesterday. It seemed to somehow polymerize too fast and I'm not sure why.

Also: some scary guy in the bathroom at SEL actually *put a camera under the stall wall and took a picture of a girl*. This happened either right before or right after I'd been in there. I'm completely furious, both at this guy and perverts in general, but also at UIC and its horrible, horrible security presence and leaky buildings filled with shadowy, deserted nooks and crannies. And also at myself, for even as I write this the whole situation makes me tired and I don't want to fight about it. I can just use the restroom at the student center and huddle in my lab with the door locked. As for going in on weekends... well, that's not going to happen for a while. What has to happen for someone to actually notice that the lab buildings need protection? A rape? A murder? We get crime alert emails if someone gets robbed on Taylor Street, which is not even part of campus. Was there a crime alert that there's a nutjob in SEL with a camera? Of course not.
- posted by Diane @ 7:20 AM | (0) Comments
Wednesday, June 21, 2006

Random sighting
On a sign for a funeral home and crematorium on Irving Park:

*yawn*
Exhausted. Multiple dog antics per night appears to be the norm nowadays. Taking Jazzy outside three times between 10 and 11 is not enough, and we have constant worry about Libby's ability to keep her food down. All I can say is, it's a good thing I don't have to be at work at any particular time, because if I had to leave at 7 I'm not sure I could function (and I'm not sure the dogs would be okay that long, either). My work is suffering but hey, that's parenthood, right? There have been far too many days recently where I just kind of wish we didn't have dogs. I don't really mean it...but sometimes I do.

Plus, I had a horrible commute this morning that involved an uncommunicative CTA, the 80 bus, and the brown line, plus a long walk. Someone was killed by a blue line train north of my stop (and how he managed that, I have no idea; the train tracks are in the middle of the Kennedy) about the time I left my house, so the line was shut down, but it was kept a Big Secret from the dozens of riders who had already shelled out their $1.75.

Now my sleepy brain and crampy, tired self have to go do some labwork without accidentally putting Taq in the exo-sap or forgetting to label the tubes. This should be fun.
- posted by Diane @ 11:07 AM | (0) Comments
Sunday, June 18, 2006

Seattle
Went to the Summer Institute in Statistical Genetics last week in Seattle, and took a course in population genetics with Kent Holsinger (my academic grandparent) and Bruce Weir. The course made my brain hurt, but I do think I got some good information out of it. Much of the analysis I was seeing for the first time, so having never tried to apply it, it wasn't always clear why the methods wouldn't always work or be robust. I have a lot of brushing up to do in the future.

Seattle itself is very odd. I had few preconceptions other than overcast and coffee and flannel and hiking boots. The overcast and coffee were certainly true (though it only really rained for about an hour all week, and was warm and sunny from midday to sunset every day). We spent most of our time in the University District, which is crammed with resale shops and ethnic restaurants and coffee and music stores and is everything a university district *should* be (hear that, UIC??). There are also a lot of crazy people in the District, people who look like they are professionally crazy. If I were casting a movie and needed colorful street nuts, these are the people I would hire. Reminded me of Monty Python's Village Idiot sketch. There were also a fair number of scary people, and sometimes we would turn a corner from a busy touristy area and suddenly feel very alone except a handful of idlers who started angling towards us from different directions. We also encountered a college-aged guy right in our hotel hallway who was most certainly high on something, asking very personal questions and wanting to be our friend and claiming to have been knocking on all the hotel doors to see if the rooms were actually occupied or the office was lying to him. Sorry, buddy, but you're creepy and we need you to go away so you don't see which room is ours.

The University of Washington itself: not much to say. It's very pretty, a mix of old Gothic/Romanesque that reminded me of Northwestern and brand-new that reminded me of nowhere I've ever gone to school. The Health Sciences building was a maze of lettered wings of varying heights whose elevators and hallways didn't all connect in an orderly way. I think our class of ~50 probably used 10 different routes to the classroom each time. Ours was pretty efficient though it involved a freight elevator.

Sightseeing: we walked from campus to Lake Union for chowder; from campus to the Arboretum and Japanese Garden; around Pike Street Market and Pioneer Square. There is in fact a decent bus system, but they don't want anyone to know about it. It wasn't hard to figure out, but don't bother trying to figure it out until you're actually there. Downtown is a mix of shabby and shiny, with fantastical hills where two blocks away the cross traffic is about 6 stories above our present position. We spent a good hour in a lovely bookstore in Pioneer Square, Flora and Fauna Books, http://www.ffbooks.net/. Amazing store, like the best-stocked botany and ecology library you'll ever see outside of a museum; we could have stayed all day. I felt bad about not buying anything but I seriously could not carry another ounce, unless maybe it was in my stomach. My Baja steak salad was very easy to carry home. :)

Pike Street Market is crowded and exuberant. The fresh flowers were to die for; I kept stopping to stare at mixes of deep purple irises and orange poppies and wishing they could make it home safely with me. The fish and crabs smelled fishy and unpleasant but I suppose I was pretty much the only person there who thought so. The famous fish-throwing was sporadic at best but did not deter a semicircle of tourists from hovering with cameras ready, hoping somebody would place an order. We never did make it to the waterfront; the downhill would have been a breeze but the return trip, with luggage... yeah, maybe next year.

MOCB
I rode the school bus throughout junior high and high school. I went to school at what we in Chicago would call a "magnet" school but back in Rockford it was just Auburn. Auburn had the college-prep program, which I was in, and the performing arts program, which I made fun of but whose students I secretly envied. I had to get up at ridiculous times, wait for the bus in the dark at the corner of an empty field where there was no sidewalk and no curb and generally an immense puddle filled with mosquitos. Good times.

But the point of the story is that today I was remembering MOCB, the letters spray-painted on a crappy old brick building somewhere off Pierpont on the far west side of Rockford where decaying industry fades into decaying agriculture. "It means Masters of Cool Beat," one of my more worldy fellow bus-riders said. I suppose all the cool MCs would pronounce it "M-O-C-B" but we funny white kids preferred "Mockba". "MOCKBA!!!" we would yell with glee as the bus went by that building in the early morning light. MOCB became our favorite greeting, preferable to saying "Hi" or "Word to your mother" or whatever we were saying back in the 80s. MOCB! MOCB!

My senior year, our high school offered Russian for the first time. My best friend (and fellow MOCB enthusiast) Cathy and I took it, because we were bored overachiever types who fantasized about becoming fabulous glamorous spies (or maybe that was just me). The Russians were still mostly bad guys at the time, you know. Imagine our glee on the day we learned about major Russian cities and how their names are written in Cyrillic. The Russian word for Moscow, in Cyrillic, is Mockba.

Just now, I looked up MOCB on-line to see what the rest of the world had to say about it. Google has no knowledge of any Masters of Cool Beat, and I suspect the worldly voice in the corner of the bus was pulling our legs. That's okay, though; his little deception gave us much happiness, indeed a happiness that has lasted nearly 20 years and counting.
- posted by Diane @ 9:29 PM | (0) Comments
Tuesday, June 06, 2006

Ugh
Terrible, terrible weekend. Both dogs were sick, I was turning inside out with panic, and the vet found nothing at all wrong with them. He thinks maybe they ate something in the yard, so now I'm looking suspiciously at the garden and wondering who the culprit was.

However, looking at this pic from last year made me feel better this morning: 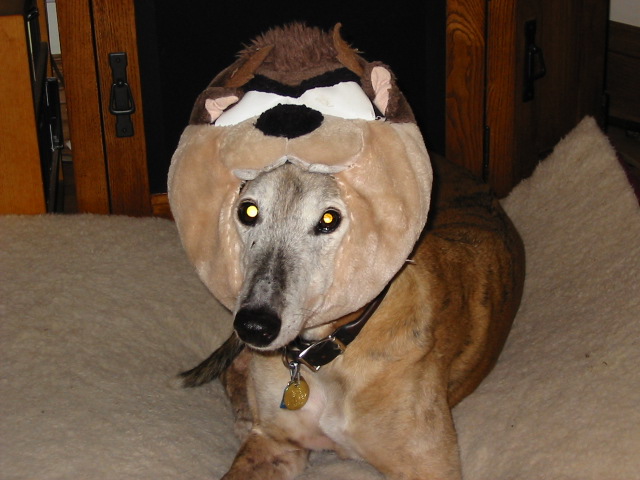