Genetics of eye color
This was interesting to me:
Genetics of eye color
The old standby in undergraduate classes is a problem involving blue-eyed and brown-eyed people. It requires everyone to pretend that the world is made up of blue-eyed and brown-eyed folks, and if a student braves the question, "What about green and grey and greenish-brown etc. etc. ?", we say "Just pretend it's this way." As the brown-eyed child of hazel + pale green, I always wondered how the inheritance worked. This article helps a little, though I think I need to pursue it further. I am surprised that it's only two loci - the reality is simpler than I suspected.
- posted by Diane @ 11:19 AM | (1) Comments
Monday, February 26, 2007

Today is a good day to rant about transportation
1) Recently revived talks of the Crosstown Expressway: maybe a good idea many decades ago but it's TOO LATE now. Cutting a multilane highway directly across a fully built-up city? wtf are you thinking?! Not to mention that it would be in our neighborhood. We're not directly in the path but very close, less than a mile. I often look at our neighborhood and the funny angled stump-ends of blocks created by blasting the Kennedy Expressway across the landscape in the 1960s. How many houses were lost? How many commercial centers destroyed? (at least one - at Irving Park and Pulaski - which has never recovered) How many neighborhoods were chopped in half, forever changed by this massive concrete barrier? And now the legislature, and the mayor, have revived talk of the Crosstown. Dear Mr. Blagojevich: Please kill this idea right now. This is not 1960. The solution to highway congestion is not to erase big chunks of the city those highways serve.

2) Daily announcement on the CTA: "Sorry, folks, but we have to go 6 mph through this very long portion of the tunnel because of track repairs." Tribune article this morning: "The CTA is running at 6 mph because the tracks are so deteriorated that trains can't be permitted to run any faster, but there is no money for repairs. At all. Repairs will not be done any time soon, so welcome to your new crappy commute." Apparently my on-fire train a few weeks ago is going to become a more common occurrence. Dear Mr. Blagojevich: If the stupid RTA can't pay for basic capital improvements to preserve the safety of its hundreds of thousands of riders, something has to change. Forget the ridiculous plans for an express train to O'Hare - let the out-of-towners going between the Hilton and O'Hare with their five oversized pieces of luggage take a cab. The daily riders, the taxpayers, the workers and students of Chicago, want trains that function correctly, and on predictable schedules. Who the hell mismanaged an entire transit system into the ground? Who can I fire?
- posted by Diane @ 11:15 AM | (1) Comments
Friday, February 23, 2007

The keycard of power
I now have a keycard that gives me access to the secret parts of the Field Museum. I had always wondered what went on in those other parts of the building... and now it's all mine! I'll be haunting the herbarium in a few days. Their molecular lab is nice but crowded. I used to dream of working there but I've grown to really like our setup here and wouldn't want to leave. Besides, commuting between UIC and the museum is awful. The 12 bus hates us all.

Had my first committee meeting, and it went mostly fine but ended on a depressing note, I thought. I hate being reminded of how far behind I am. It was one of those moments where I feel balanced on a decision point, and tipping one way (QUIT and get a real job!!) or the other (Work your butt off and be miserable for the foreseeable future!) are equally likely, and equally appealing. Do I care which way I fall? Depends on when you ask me, whether my last PCR worked, how low my blood sugar is.

I had plans for the day but that trip to the museum sucked the middle out of the day and left me with two useless day-bits. I think I'll head home early and get back to grading exams. One page down, four to go!
- posted by Diane @ 1:52 PM | (0) Comments
Friday, February 16, 2007

Resurfacing
I'm okay. Mark's okay. Libby... not so much. I watch her as much as I can on the webcam, and other than yesterday when she slept motionlessly for about three hours and I was totally panicking, she's restless all day, on the bed, off the bed, at the window, at the door, and apparently also howling or barking from time to time. I don't think she's ever really been alone before, and as the most pathetic omega dog possible, the loss of her alpha dog seems to have rearranged her world rather dramatically. When we're home she's clingy, and we spoil her with attention and treats. I'm hoping to take the family on a camping/collecting trip this summer. It might be good for all of us, plus at least one part of my trip won't be so lonely. Plus: free labor!

Other aspects of life: massive snowstorm that buried the city in lovely but impassable white fluff; bitter cold; adorable bunny tracks in the back yard. My first committee meeting is next week, and I need to get some kind of agenda out the door in the next four hours but am having trouble focusing. We gave our first Bio 230 exam yesterday and now I have 172 exams to grade.
Student: Do you think the grades will be posted this weekend?
Me: [helpless laughter]
And, I have successfully sequenced a piece of DNA from my species. As far as I can tell, it is the first time this region has been sequenced in this family (except of course the fully sequenced genome from cotton). Observe and be amazed by my pretty chromatogram:

We met Jazz on a Friday night in May of 1996. Mark and I had just bought a house and were finally ready to get our first dog together. The adoption people brought out a parade of greyhounds, one by one, and we felt so much pressure to choose the right one. When the dogs were brought out for a second time, this red brindle boy glued himself to my knee; he was soft and pretty, and they told us his name was Jazz. We didn’t really choose him; he made it very clear that he belonged to us. I will never forget when I had to go back out to the car for the leash, and as I looked back through the glass wall of the building I could see him staring at me, ears up, in a pose that I would see thousands of times over the years. Jazzy was a mama’s boy from the moment we met him.

That night began eleven wonderful years together. Jazzy had the sweetest, most gentle temperament of any animal I’ve ever known. He stood patiently when small children wrapped their arms tightly around his neck, and he could nibble off half a peanut from my fingers without hurting me. He wasn’t kissy or snuggly, but he would go nose to nose with someone, almost touching, to show them his affection. He was a big silly dog who bounded through the house back and forth between me and Daddy, waggling his head, tongue lolling, just so happy to be with us. Any time we weren’t moving fast enough for him, he’d put his bicycle seat-shaped head behind our butts and push forward. I sometimes played hide and seek with him, hiding in a closet and peeking out to see his quizzical face and pointy ears come looking for me, and when he found me he was unashamedly joyous. He loved to run, in our little yard or in wide-open spaces, and his running was a beautiful sight to see; Jazz after all came from a champion bloodline, and his record shows one race win before his early retirement. He enjoyed attacking and tossing his stuffed animals, but even better was pulling the stuffing from ripped toys until he was surrounded by a cloud of fluff. When he was happy, he absolutely had to have something to carry around, and if a toy wasn’t handy, a shoe would do. Most of all, Jazzy loved soft things, and his life was an endless quest for comfy places to lie down. If I pulled off my sweatshirt and dropped it in the grass, he would plop down on it. If we left a laundry basket on his couch, he would stare intently at it until someone noticed and moved the basket. When we helped the family build a deck, he discovered the joy of lying in warm sand and refused to move even when power tools were being used right next to him. And one day, I pulled all the loose stuffing out of his dog bed so I could wash the cover, and when he discovered the nose-high pile of stuffing and waded in with his long legs so he could lie down, it was about the happiest we’d ever seen him.

But time is relentless, and Jazzy got older. We had to do more things for him as he became weaker, and over time little bits of his personality became little more than memory. We carried him up and down stairs for his last couple of years, but eventually even walking became difficult. He was diagnosed with cancer in his 14th year, and there was little we could do except manage the pain and keep him company. It finally became clear to us that he was too unhappy to go on, so on the morning of his 15th birthday, February 7, 2007, we let Jazzy go. He had the best life a retired greyhound could ask for, and two people who loved him very much. He was a part of our lives and our home for so long that his absence leaves a gaping hole, but we will fill it with memories, visions of a bright red brindle boy galloping in the sunshine, of his crazy legs in all directions as he sleeps on his back on the bedroom floor, of his big brown eyes gazing dreamily at us over the arm of his couch. We will miss you, Jazzyboy. 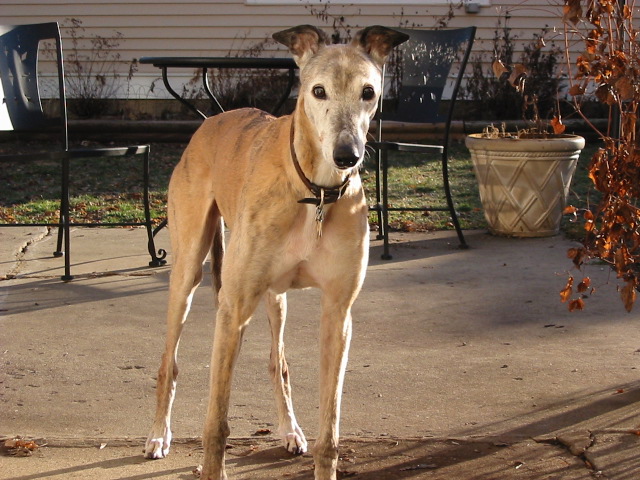 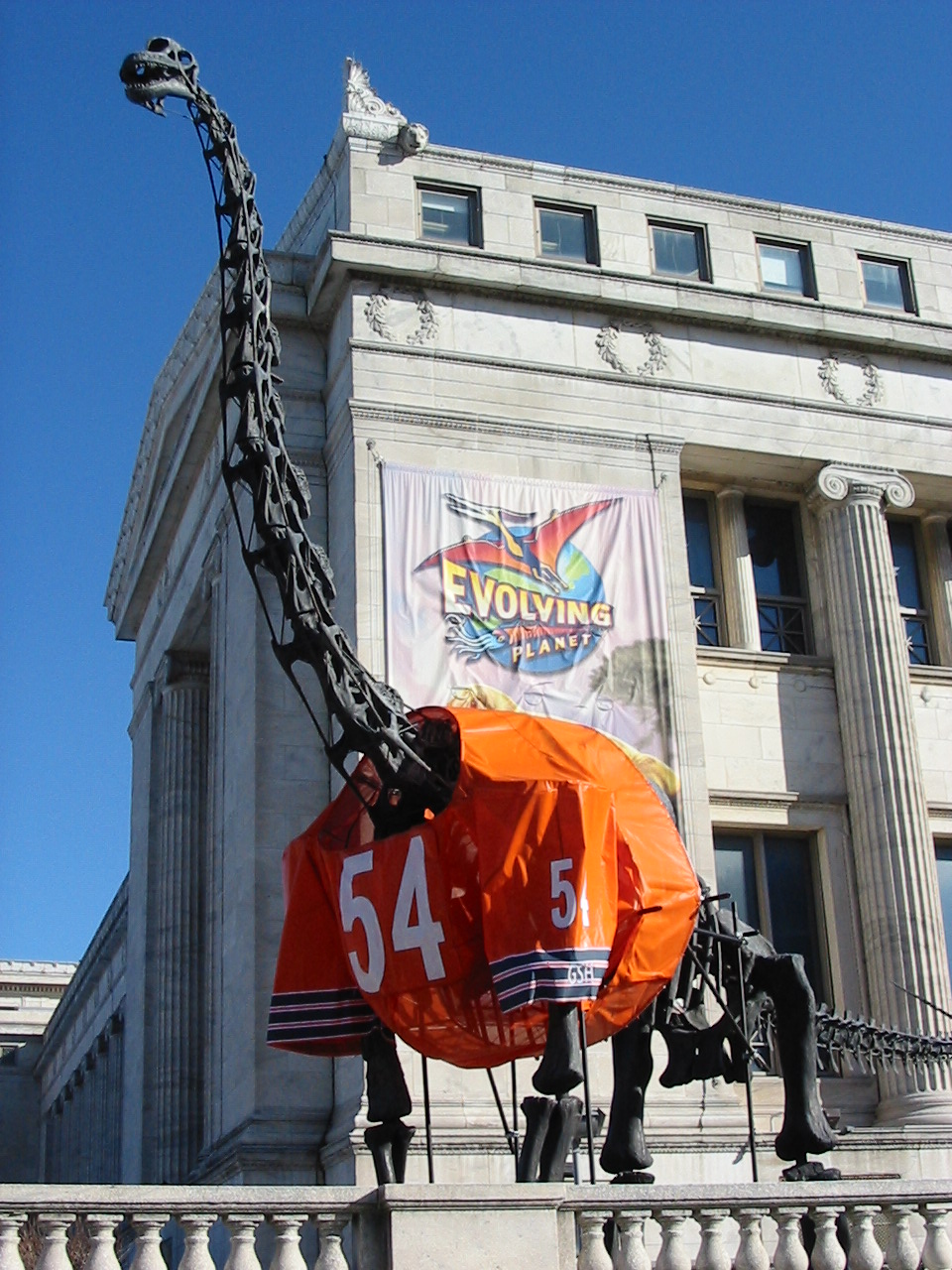