Post-season celebration
I got to see the White Sox's World Series trophy at City Hall today. I was about two feet away from it, and although it was for the wrong team, it still gave a little thrill. It's very pretty, smaller than I expected, with a soft golden glow. A tall dorky guy with coffee was there, giving every indication that he would hover near that trophy all day and consider it part of his assigned duties. He kept trying to engage me in annoying conversation, and seemed to be purposely getting in my way as I tried to take a good picture. Some people just don't pick up on those polite-but-clipped phrases that strongly imply "Not interested! Please stop talking to me!" When I left, he was lounging against the wall with his coffee. Your tax dollars at work!

What kind of Humanist am I?
Surprisingly, not as much of a hard-nosed anti-spiritualist as I thought. Hrm.

You go out of your way to build bridges with people of different views and beliefs and have quite a few religious friends. You believe in the essential goodness of people, which means you’re always looking for common ground even if that entails compromises. You would defend Salman Rushdie’s right to criticise Islam but you’re sorry he attacked it so viciously, just as you feel uncomfortable with some of the more outspoken and unkind views of religion in the pages of this (i.e. New Humanist) magazine.

You prefer the inclusive approach of writers like Zadie Smith or the radical Christian values of Edward Said. Don’t fall into the same trap as super–naïve Lib Dem MP Jenny Tonge who declared it was okay for clerics like Yusuf al–Qaradawi to justify their monstrous prejudices as a legitimate interpretation of the Koran: a perfect example of how the will to understand can mean the sacrifice of fundamental principles. Sometimes, you just have to hold out for what you know is right even if it hurts someone’s feelings.

What kind of humanist are you? Click here to find out.

ETA: Actually, this should be "What kind of *British* humanist are you?" The political questions would be easier to answer if they were about U.S. situations. WTF is Jenny Tonge, anyway? And I'm thinking that thing about Edward Said is a typo. Replace "or" with "to" and it makes mucho more sense.
- posted by Diane @ 12:29 PM | (0) Comments
Sunday, November 13, 2005

Little digital people will ruin your life
New vow: I will only play The Sims on weekends and holidays. By weekend I mean Friday night through Sunday evening.

My legacy family is growing and it's hard to keep track of the lineages so I've made a page here:
The Brokaw Legacy 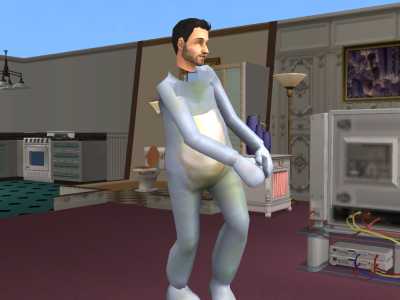 Birthday loot (finally)
I took my Old Navy giftcard shopping today before I went to the office (I continue to be bitter that on Veteran's Day, every single person in government has the day off except me, so dammit I'm going shopping!). I had intended to get cute fleece gloves that match my new, crazily apple-green coat. Alas! The gloves were apparently made for people with fingers that are only two inches long. Are my hands really so freakishly huge that I can't wear even large-sized gloves? Apparently, because I also tried on some large-sized leather gloves at Carson's and couldn't even get my fingers into them. Maybe I should reconsider that basketball career after all.

Some random undergrad just came in and asked me for a kleenex. That was odd. (Yes, it was an actual Kleenex(tm) brand kleenex - this university has a strong policy against genericizing of brand names, as you know!)

One of my students told me that I'm the first TA she ever had who actually cared about the students. That was very sweet of her to say. I think I've been fortunate so far; the kids in my class are a good bunch with one exception (I'm looking at YOU, Mr. or Miss Cheaty McCheat-a-Lot), and when people ask me content-based questions I dare to hope that they actually care about the topic and find it interesting. Yes, I realize that amorphous Pre-Cambrian blobs and 1,001 marine creatures that all look like shaving brushes are not that interesting, but they're part of a much larger picture that is so remarkable that mere lectures can't describe it properly. And now we're doing the section that may be subtitled "Animals You've Heard Of (and some plants, too)", so levels of interest should go up.
- posted by Diane @ 1:53 PM | (0) Comments
Wednesday, November 09, 2005

Just so you know: this book is a *parody*
A woman especially, if she have the misfortune of knowing any thing, should conceal it as well as she can. --Jane Austen, Northanger Abbey
- posted by Diane @ 10:14 AM | (0) Comments
Tuesday, November 01, 2005

Professional pride
I went to Testing Services today to get the scantron forms for the exam we're giving on Thursday. I told the guy in his little rabbit warren of a room that I needed scantrons, and while he busied himself with collecting the forms and such, he gently reprimanded me for using the word "scantron". "They're actually just called answer sheets," he said. "Scantron is a brand name for a kind of form that we don't use here. It won't even work on our equipment." He seemed to be sort of half-joking, so I smiled and said, "Well, when you grow up in the 80s, you get used to calling them scantrons." He got all serious and told me that they never used scantrons at UIC, even in the 80s. I wisely let it go after that. I should have asked him if he had a kleenex. "Actually, they're called facial tissues. We only use Scot brand, which is incompatible with Kleenex-brand facial tissue dispensers." What-EVER!

Review session for second exam went fairly well. I gave them candy since it was Halloween.
- posted by Diane @ 6:31 PM | (0) Comments