Holiday cheer!
There's a guy who plays guitar and sings at the Blue Line Washington stop in the morning. He knows a single chord progression, in one key, and applies it unilaterally to every song he knows. He actually has a very nice voice, so if I turn off my inner music critic I can pretend his lack of skill is actually a jazzy interpretation. Today we were treated to Christmas songs, featuring "The Little Drummer Boy" with bits of verses all mixed up together, and an unintentional medley of "Feliz Navidad" and "I Just Called To Say I Love You". Then he reverted to one of his standards, "Tin Man", rendered with surprising accuracy and skill. Of course, in typical America fashion, the song has like two chords. But he nailed them!

Feeling flush with Christmas spirit and a recent visit to the ATM, I put some money in his basket, and was disgruntled to realize he was looking the other way when I did it. Not that I'm looking for accolades but I think it must do the singer some good to see the appreciation. As far as he knows, I'm still one of those bitches who can afford an overpriced latte but not a buck for the artist in the room.

Tomorrow and Saturday: cookie-making at various venues. Sunday and Monday: cookie-eating at other various venues. Tuesday and beyond: much wearing of sweatpants and fervent vows to start running again "as soon as the weather gets warmer." Ah, holiday traditions.
- posted by Diane @ 1:23 PM | (0) Comments
Tuesday, December 19, 2006

Well it's about time.
Time's Person of the Year: Me

Today: Christmas shopping. One more thing to buy, and I think I'm done, but of course there are also cookies to be made. And eaten. And made again, to replace what I had intended to take to various parties.

I'm very happy to bid goodbye and good riddance to a fairly crappy 2006. Not that it was relentlessly awful, but there were enough significant unhappinesses that I just haven't felt like myself in months. I miss myself but I don't foresee a return for quite a while yet, since those bad things are still around. There is a woman whose livejournal I read often, and she had this to say about her also significantly unhappy year:

"I have no talent for unhappiness. I always end up forgetting I'm unhappy and making jokes about it." 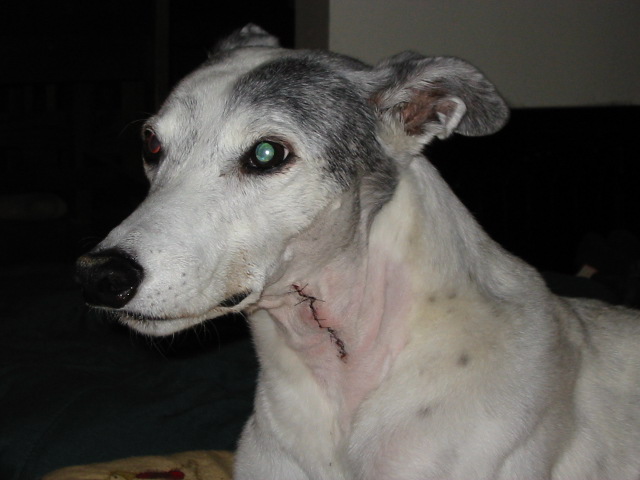 We can't believe how well Libby is doing, 6 days after surgery to correct her laryngeal paralysis. And, I have to say, the cutest thing in the world is watching our little muffin-face eating dog food from a spoon.
- posted by Diane @ 9:46 AM | (2) Comments
Tuesday, December 05, 2006

I do more before 9 am than most people do all day
This morning: got up at stupid o'clock, under a brilliant full moon, and took Mark to work. Drove home, got myself ready for the day, did usual dog maneuvers, gave Libby an acepromazine, then drove her to the hospital. She freaked out a bit in the truck but after a few minutes she lay down and stopped wheezing. When I arrived at the hospital, she was happily stoned and didn't seem to mind the dogs and noise at all. We met with the doctor, who seems very nice and capable and has experience in treating laryngeal paralysis. He was also quite impressed that we have a greyhound who is almost 15 - Jazzy, despite his various neuroses and such, is approaching a legendary age. It used to be, when we told people how old he is, they'd give us that sympathetic "Oh" that means "We're all aware that he doesn't have much time left." Now, we get the "Oh!" that means "That's amazing! Good job!"

Last I saw Libby, she was flopped in the doctor's arms and being taken off for x-rays. I paid the (rather impressive) deposit, got a bit misty, and found a sympathetic ear in the nice woman at the desk. Then I drove to Mark's office, left the truck, walked to the nearest Metra station, and took the train downtown. By then it was close to lunch so I treated myself to a burrito at Burrito Beach, then walked to campus with it inside my coat. I amused myself by imagining various people being extra kind because I looked pregnant, then poking myself in the abdomen and saying "No, it's okay, it's only a burrito!"

Libby is now out of surgery and is doing fine, and the weird lump in her mouth has been removed and is being biopsied. We can pick her up tomorrow, and then the long recovery begins. Meanwhile, there's just one dog on the webcam, and no furry white snugglemuffin to come say good night to me tonight.
- posted by Diane @ 1:57 PM | (0) Comments

Birthday meme
A tag from Heather!
Instructions:
1) Go to Wikipedia.
2) In the search box, type your birth month and day but not the year.
3) List three events that happened on your birthday.
4) List two important birthdays and one death.
5) One holiday or observance (if any).

Holiday or observance:
In ancient Greece, the first day of the Eleusinian Mysteries, during which the sacred objects were brought from Eleusis to Athens.

I knew about the Star Spangled Banner but not the rest. Bowzer was always my favorite Sha Na Na! Also, reading about President McKinley's medical care makes me glad that if I'm ever gut-shot by a fanatical Russian/Polish anarchist, I'll be treated using 2006 medicine.

Dream on
Last night: One of those dreams where you take a final exam for a class you didn't even know you were enrolled in, only I was the TA for the class. Students were handing me their exams covered in equations and essays (apparently an important variable is a giant M that covers a third of the page), and I was staring at the pages wondering how in the world I was going to grade this mess. Then I realized, Hey, there are two other TAs in this class! I can just make them grade it! I woke up so happy, until I remembered that here in the Real World, I am the only TA for my class. Rats.
- posted by Diane @ 7:33 PM | (0) Comments