On the road again
How long is that song going to be stuck in my head?!

Leaving Monday morning with my mom to do a relatively short trip eastward, hitting Ohio, Pennsylvania, and West Virginia, with hopefully some time for fun stuff along the way. It's going to be very strange to be in charge for a change; it's always been so easy, even as an adult, to slip into a "Mom's in charge" mindset whenever we're together. My first imperious decision will involve the Dunkin Donuts on Addison. We're going and that's final! I must have iced coffee for the road! Also a donut, because it would be silly not to.

Took Libbyface to the vet yesterday to see if he has any answers regarding her progressive rear-end weakness and her rapid weight loss. She was about 75 lbs. when we got her 9 years ago; yesterday she weighed 49. That's a third of a dog!! Yes, she was overweight before, but she's looking very gaunt now. Doc couldn't say other than that her discomfort with standing makes her not want to go to the food dish. We are now in Operation Bed Snacks, putting handfuls of food on her bed throughout the day just to get some calories in her. As for the weakness, the polyneuropathy is progressing faster in her than it did in Jazzy. There's really not much we can do about it. No more running, spinning, bouncing, or flying down stairs for Miss Libbyface. However, lots of snuggles and kisses and kibble-scented belches. Some things cannot be stopped.

ETA: Was just remembering someone's blog post in which she commented that the shape of West Virginia infuriated her. After staring at it in the atlas for an hour, I have to agree. Ohio and Maryland appear to have tossed some leftover land on the scrap heap, and West Virginia cheerfully stuck them on to herself like a crazy bag lady. Look out, Virginia, she's coming for you next!
- posted by Diane @ 10:35 PM | (0) Comments
Wednesday, July 25, 2007

Notes from the road, part 3
I was actually heading for central Missouri, deciding to skip the western Iowa and Nebraska pops until a later time, but because I misread the map I went too far west, to Des Moines. As long as I was there, went to a Cubs AAA baseball game (where I sat next to an entire bachelor party, which was passing an inflatable sheep around to all the hot women to be signed, and it didn't bother me at all that they ignored me b/c I was kind of unshowered and scary), set up camp in the pitch dark in Walnut Woods S.P.

Missouri, Sunday and Monday. Missouri was a bust. In fact, from Des Moines to home I didn't see a SINGLE basswood tree in the wild. I will refrain from expressing my frustration too much - I spent a long day raging about this to myself - but to all the botanists who told me to just wander the countryside and Observe and Stumble Across Populations, it DOES NOT WORK. I thought hard about it and decided not to waste time and gas and to only go places I was reasonably sure I'd find basswood. Well, it turned out even those places didn't have any. However, I spent an hour near Columbia, Missouri collecting what I thought was basswood and turned out to be &$#*!@$& mulberry. ARGH. Tired, furious, frustrated, and desperately in need of a shower, I drove to St. Louis and got a hotel room. Vented at the husband on the phone for a while, showered, collapsed into bed, got up and showered again, then headed south to find an obscure location near Fredericktown. A long drive on a gravel road later, I failed to find either basswood or the forest road I was supposed to turn on, gave up and went to Illinois. Camped Monday night at Horseshoe Lake in southern IL, saw my first baldcypress swamp.

Illinois - My last chance to find trees was in Shawnee National Forest and surrounding areas. Again: nothing. I failed to find the exact site I was looking for, and being so close to home made me itch to just give up and get back. I did a bit of touristing, seeing Cairo (a town slowly decaying into history), Fort Defiance S.P. (oh, State Park System, you have dropped the ball on this one) and the confluence of the Ohio and Mississippi Rivers, Cave-in-Rock, and then that was enough. I turned for home and got there in about 5 hours, arriving Tuesday evening with my truck full of laundry and leaves.

It's good to be home. I don't want to have to leave again but I depart next Monday.

Notes from the road, part 2
Left Milaca, Minnesota on Friday morning and headed south past Minneapolis. I've been to the Twin Cities before, so didn't feel any need to venture in, just zoomed by on one of their many expressways. There were cops on every overpass for a while, looking down. I don't know what they were looking for but I drove very politely during that stretch.

Northfield, MN. Motto: Cows, Colleges and Contentment. Home of St. Olaf and Carleton Colleges (I really wanted to go to Carleton if the money had worked out) and a Malt-o-Meal factory. The whole town smells like Malt-o-meal. Northfield was a really nice city but I especially like the countryside south of it, all rolling hills and pastures and cornfield. I arrived at the Nerstrand-Big Woods State Park mid-morning, did a bit of hiking, and collected from a maple-basswood forest that is a remnant of what this whole region looked like at one time. Spent a few hours there, then off to Iowa!

Yellow River State Forest, IA. This park is in the Driftless Area, a part of the continent that was untouched by the last few glaciations, with lobes of ice going east and west and curving around to enclose it from the south. The landscape is rolling hills and exposed limestone bluffs, owing its topography largely to the action of water, not ice. I stopped at an overlook in Marquette, IA, that was formerly the endpoint of a bridge that crossed the Mississippi; from the endpoint you get a good view of the newer bridge that crosses a few blocks to the south. I camped in YRSF next to Paint Creek, near a guy who was camping with his dog. Seeing them made me homesick but alas, no cell phone reception in that area. Made my collection on Saturday morning and moved along.

Notes from the road
What do I do when sitting behind the wheel for 14 hours a day? I compose brilliant, witty blog entries that nobody will ever hear. Then when I sit in front of the computer to write an actual entry: nothing.

Left home yesterday morning, searched nearly in vain for a gas station on the North Shore, saw a herd of buffalo and lots of cool glacial landforms, and ate at the world's most polite Arby's in Oshkosh ("Would you like a mint? How was your meal?"). I've been through eastern Wisconsin before and there's just something about it that's terribly off-putting. The landscape, the towns, everything seems scrubby and run-down, and the people sense it but are too disillusioned to fix it. I escaped Oshkosh and headed for the North Woods. On the way there I happened across the Wisconsin Concrete County Park. What exactly does that mean, you ask? When I am more awake, I will post a picture and you will be every bit as baffled as I was.

Then on to Chequamegon National Forest. I camped in my snazzy new blue tent, and I hope the red squirrels enjoyed the show because my first attempt to assemble the tent did not go well. Sometime in the middle of the night, it started pouring rain, but I was snug as a bug in a very noisy rug.

This morning, got on the road at 7:30. Went to my first stop, though I never actually found the site so went *near* the first stop and collected samples. Went the long way afterwards so I could see Lake Superior, but at Chequamegon Bay the lake is underwhelming. I pursued a skittish blue heron for a while, then headed off to Duluth, which is a lovely city though I mostly just zipped right through. My next stop was in north-central Minnesota, where I found lots of trees to sample and lots of bugs to swat at (basswood branches make excellent fans!). Minnesota is VERY buggy. I saw a ginormous beetle nearly two inches long and shaped like a shiny barrel, and clouds of large-ish bugs lifted off from every branch I touched. Deer flies swarm the truck when I'm in the woods, but they haven't bitten me yet. They mostly like to smack into my head at high speeds. I tie a bandana around my ears and look like I'm in the Aunt Jemima gang, but at least my ears are so far unmolested.

This afternoon I felt like I was running way behind, not that I had a set schedule or anything, so decided to drive as late as I could stand and then stay in a motel. However, I didn't count on the Central Minnesota Wasteland. Oh, you wanted food in the next two hours? HAHAHA! Hotel? Bathroom? Where do you think you are, civilization?! It turned out to be a BP that saved me. Not only did they have Cute Little Pizzas, they had wi-fi and I used Expedia to find the nearest hotel. So here I am in Milaca, MN, using their free wi-fi and getting ready to pass out. I'd better not get too used to this hotel thing because $59 vs. $14 a night is a big difference!

So my mosquito bites and extremely tanned left arm are going to bed. Pictures later if I feel up to it.

Supposedly a pagan fertility symbol, 17th century. Or maybe it's not. In any case, now he has a friend:
Ring toss?

My last lingering shreds of propriety prevent me from posting the animated version. Let's just say it does exactly what you think it does.
- posted by Diane @ 6:31 AM | (2) Comments
Thursday, July 12, 2007

Success is its own reward
But sometimes a new camera makes a nice reward, too. I've had my eye on this camera for about a year, and now it is mine! I haven't figured out what all the buttons do yet, but plenty of time for that. 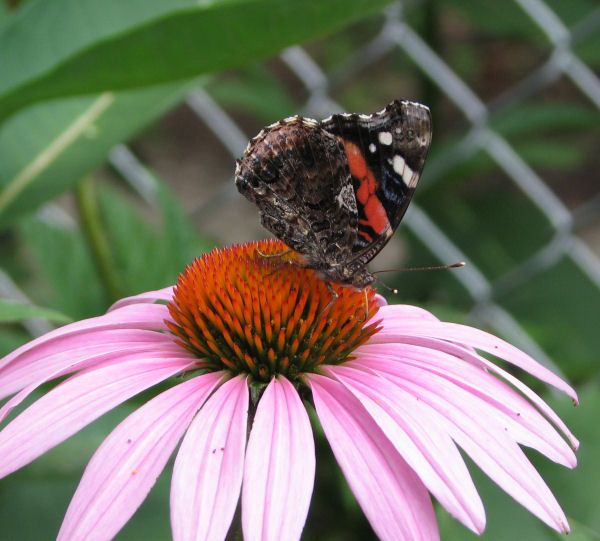 Spent the first three days of the week at the annual Botany conference here in Chicago. I went to many interesting talks, some less interesting talks, and some talks that went zipping way over my head. Rather than panicking that I might be tested on those things that I didn't know, I mentally shrugged and said to myself, "Can't know everything!" It's good to be realistic again.
- posted by Diane @ 10:07 PM | (0) Comments
Monday, July 02, 2007

One last dream
Last night: I dreamed that some woman scammed me into writing her a check for $30,000. I knew it was a scam, but I wrote the check anyway, and then had to figure out how to keep her from cashing it, without letting anyone know how dumb I had been. My brilliant plan: go to the atm and transfer a bunch of money out of that account so when she did try to cash it, it would bounce.